Last Friday night I was invited in to TOSS for a food tasting! Let me just mention right here that I am Not a food blogger & I am a Lifestyle blogger so since I hadn’t been to TOSS before I decided to go on with this invite & let all my Pune peps kn ow about this place & how my experience was 🙂 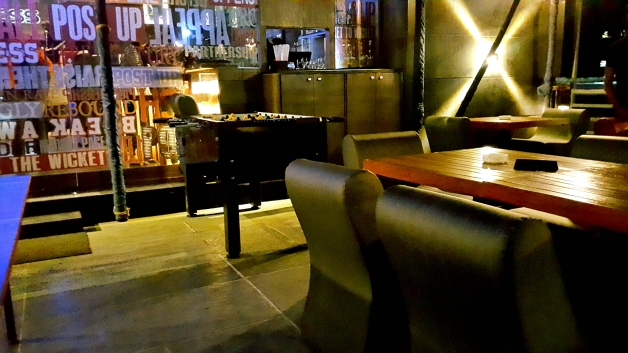 TOSS is a Sports lounge whose USP especially is the Beer Pong & all the other drinking games that you can now play at a bar with your groupies rather than having to plan it at home!

Located at Mundhwa near Koregaon Park Annexe in the Passport office building. It also happens to be right beside Independence Brewing Company (yes tough competition, for TOSS)

When we entered at about 9, the outside section (that’s open & only temporarily covered due to the rains) was quite empty. Nonetheless it was the printed glass door that seemed pretty inviting.

On entering you get to witness a spacious room with a real high ceiling. Oh & on the ceiling a huge cricket ball (well just half of it). Shuttlecock & football shaped table lamps were hanging. Major sports impact is felt in the ambience of TOSS.

Since we were there on a Friday night which also happened to be a ‘Live Fridays’ night the centre section was emptied out with just tables on the side. So, Fridays isn’t really a night you would want to opt for TOSS as a dinner pace.

We were lucky though to have witnessed Manfarid (the Band) play there & despite it being a little too loud for my liking we had a great time with some real good numbers. 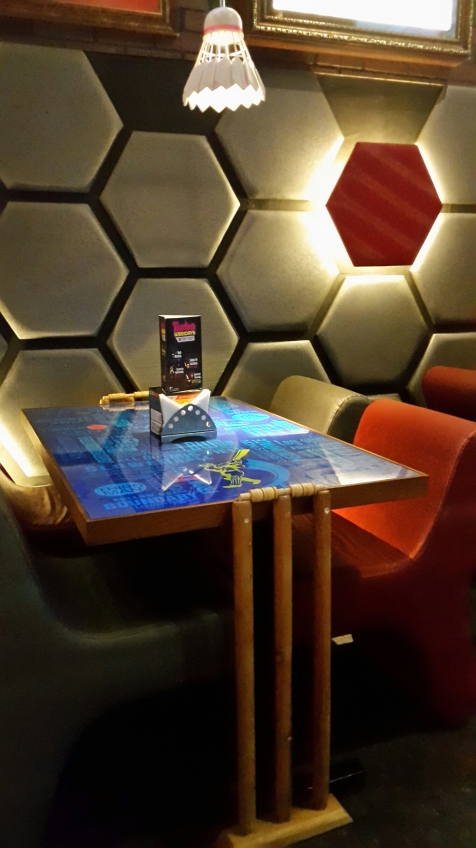 As far as drinks are concerned they have all the usuals that you would have on any bar menu like martinis, margaritas, daiquiris, shots, flaming shots, decent range of wines, whiskey, scotch, beers.

What appauled me were these ‘Supersized Cocktails’. I wasnt really into drinking this night since I evidently was there for a food tasting session but I yet wonder if I would try it later being priced between 1000-1400 for a supersized glass.

Now coming to the main part!

For the first time I was stuffed with So much food that I had to get up take a round, get a breather & then come back to the food.

Both the salads were very good & we definitely started of the first course on a very happy note.
The Sensational Caesar salad did much better than I wouldve expected. This Caesar salad was just right with fresh juicy lettuce leaves, the chicken was also very well grilled & wasnt dehydrated at all & what I liked was that they didn’t over do the salad dressing. Quite a perfect Caesar salad.

The ‘Totally Tabbouleh’ Salad was a nice chatpata start, which is quite welcoming for most of our Indian palettes with the mint, lime & cucumber elements. To a certain extent the salad was also quite refreshing. So if you have had a rough day, don’t take it out on the food & let this Lebanese salad refresh you 🙂

Appetisers
We had three appetisers pour in but the Instant favourite for me was the Cigar roll.

The next best was the Mediterranean Mezze Platter which had humus, baba ghanoush, tabbouleh & tzatziki. Garlic flavoured flat bread was served with it to scoop out the dips. It was a perfect bite into healthy food.

The Chicken nuggets would definitely not be a choice for the health concious given its fried & pretty oily.

What I quite like were the TOSS Dips! Five absolutely different flavoured dips (Toss Parma Dip, Chilli Mustard Dip, Chip Dip, Wine Gravy, Creme de Chive Lemon dip) were sent in with the appetisers & they were quite yummy. Something definitely different I saw at TOSS.

Sandwhiches
Im not really into sandwhiches but did try their Grilled Cheese & Chipotle Sandwhich. It was quite Ok considering they gave the normal grilled cheese sandwich a kick with a chilly chipotle sauce. Was served along with cajun spiced potato wedges. 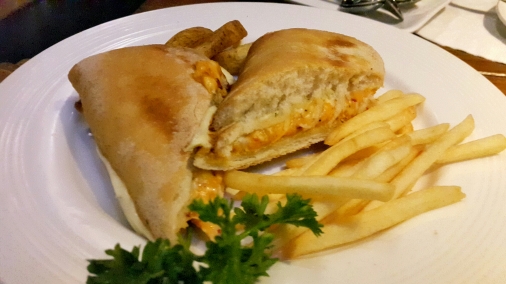 Pizza
Pesto Chicken Pizza! Hmm might not sound too good but trust me it was quite good with the thin crust, the red peppers, grilled chicken & cheese being at just the right level. I enjoyed the pizza 🙂

Burger
The Grilled Chicken & cheese slider was definitely a No-Go for me after the first bite. The burger actually bad chicken pieces inside instead of a patty & the worst part was that the chicken was dehydrated & very chewy.

Had been served the Risotto too but had to send it back. Not like us bloggers have bigger stomachs than regular people :p
After taking a decent break from the food & the loud music inside we came back in to our Tiramisu 😀

Well if there is something I would definitely go back to TOSS for its the Tiramisu. After all the food we had I just wanted to only taste the desert but to my surprise I ended up eating the whole tiramisu & licking my spoon clean.

So, this Tiramisu wasnt like a pastry it was served in a glass with lesser of a biscuit layer than normal, the rest of it was like a coffee flavoured mousse. Smooth texture with beautifully blended hint of kahlua. This was perfect for someone like me who loves sweet stuff but not overtly sweet. Because it was so light & the sugar content was just right I managed to eat the whole thing (Imagine after eating all that food above I could, so you know what I mean)

Final Verdict
For me if it isnt unique it isnt worth it! But, since TOSS at Lullanagr is closer I guess with the added conveniece I might head there some time around. And If I was to suggesr you could definitely head to TOSS for the Salads, Cigar Rolls & definitely the Tiramisu 😀
Here’s a look at me & a fellow blogger at the tasting 😉

Be Yourself & Shine On ❤